Outdoor advertising holds a special place in any marketing firm’s heart. That’s because it has a unique set of creative challenges and opportunities that other media outlets simply don’t. For instance, outdoor advertising audiences are mobile. Whether in-car or on-foot, they’re passersby, limiting how much you can actually tell them. Similarly, outdoor advertising has changing variables that have to be considered, like weather and sunlight.

In this blog, we share 10 tips for creating outstanding outdoor advertising, as well as some heralded examples of each.

If nothing else, advertising 101 will leave you with this: keep your billboard headlines to seven words or less. There simply isn’t enough time to take in much more than that. So keep it short and sweet and, most importantly, super clever.

In just seven little words, McDonald’s takes a stab at its more expensive competition while also highlighting its new offering. Play on Your Surroundings

Although you don’t know what will be nearby when someone reads your print ad or stumbles upon your digital banner ad, you do know what will be near your outdoor ads. Increase the power of the creative by playing off of the board’s surroundings—from buildings to power lines to other billboards.

This hard-to-miss ad uses actual wires and poles in Indonesia to advertise a nose hair trimmer. 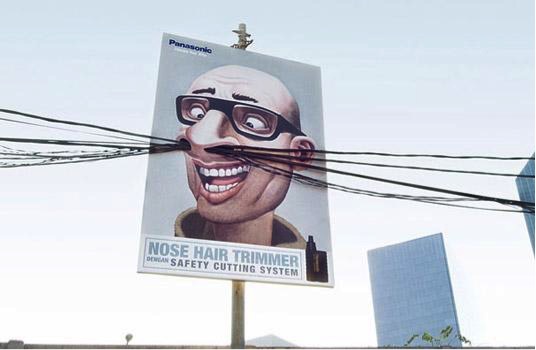 Placed in the ocean off the shore of Mumbai, this board gives the sense that the city has been flooded—a perfect way to advertise the disaster movie The Day After Tomorrow. 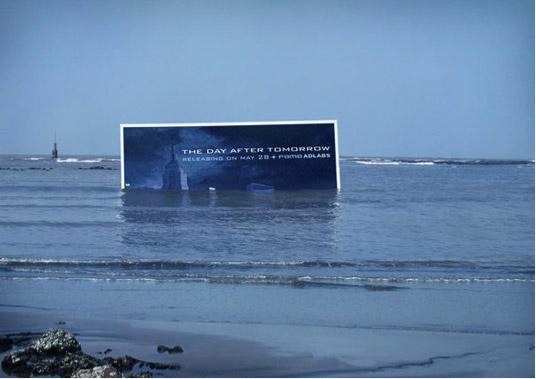 Think Outside the Board

Long gone are the days of outdoor advertising confined to the rectangle space of billboards. Today, features such as extensions, pole wraps, building takeovers and props deliver creative that extends far beyond the confines of the perceived ad space. Stretch your outdoor creativity beyond the board.

Kit-Kat uses clever props near its “unfinished” board to highlight the brand’s tagline, Have a break. Have a Kit-Kat.

Nationwide shows that life comes at you fast with this dramatic parking lot takeover. Sometimes, brands will purchase a particular billboard location so they can compete head-to-head with a brand that’s advertising nearby. But the ones who do it best (or at least most memorably) use their placements to comment on or respond to their competitors’ ads. Whether you’re talking trash or one-upping, it makes for an interesting and effective outdoor advertising approach.

Audi taunted BMW with the billboard on the left. So BMW responded accordingly. Creatives have tapped into the power of Mother Nature herself to create ads that use sunlight, rain and more to deliver their messages—creating brilliant advertising that’s as dynamic as the world around them. This billboard for Koleston Naturals hair color showcases a range of brilliant hair shades depending on the sky behind it. 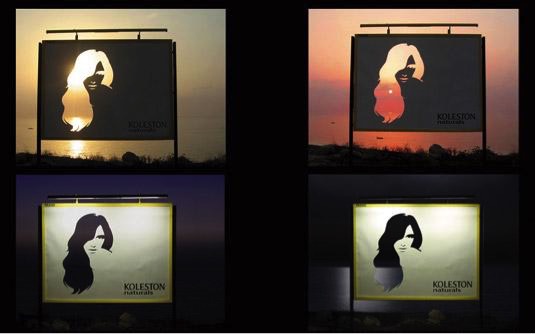 Move over billboard extensions; it’s time to make way for 3D outdoor advertising. Adding 3D elements to billboards is sure to add cost, so make sure the creative is worth the investment and that the 3D is critical to achieving maximum impact.

Levi’s extremely detailed and life-like jeans were a perfect pair for this billboard in Soho. A twist on Absolut’s iconic ad images, this 3D board turns a vodka bottle into a New York apartment. Thanks to sensors, monitors, smart phones and location-based services, outdoor advertising is becoming more interactive than ever. Now your creative can respond to those nearby to tell a unique message or create an engaging experience.

This clever outdoor board for The Economists lights up when someone walks beneath it to suggest reading the pub sparks bright ideas. Smart car advertises on the narrow side of an outdoor display to emphasize its minute stature. And miniature billboards make a big impact for Smart car as well. This design maxim applies particularly to outdoor marketing. Unlike television or print, you’re almost guaranteed never to have your audience’s full attention when it comes to outdoor ads. Design must be oversimplified so it can be absorbed quickly and easily.

McDonald’s gets minimalistic by creating food icons in these image-only boards. Sometimes, brilliant ad creative has nothing to do with following any of the rules. Instead it stops us all in our tracks with something that’s completely unexpected, never-before-seen and one-of-a-kind. Take risks and push boundaries with your outdoor advertising—no matter how many of the rules you break along the way.

This ad for homelessness charity Depaul wraps around a corner. Read the first side and you hear one story. Read both sides together and the story is completely different.