“If you build it, they will come.”

While we’re not talking about baseball, the sentiment is the same. Own a piece of land, build something great, bring in the community.

The work Newland Communities puts forth in creating and launching one of its unsurpassed mixed-use, master-planned communities is far from that simple, but our job at The Brandon Agency was to help the company publicly debut its newest North Carolina community—RiverLights in Wilmington—making it immediately recognizable and in demand throughout the region.

Newland is a diversified real estate company that leverages a national platform and over 40 years of experience to perform challenging and diverse development, investment, management, and advisory services across a wide range of real estate. The company’s mixed-use development business, Newland Communities, actively owns, operates and develops premier residential master-planned, commercial, retail, and urban mixed-use real estate across the U.S. North America Sekisui House, LLC, owns RiverLights and has partnered with Newland for the project.

TBA’s work began long before official groundbreaking ceremonies, with the creative team crafting a logo that would come to symbolize home for future residents. TBA’s brand strategists partnered with Newland Communities corporate leaders to chart a plan that helped both companies navigate the branding and opening of a community the size of RiverLights, including:

The time from project launch at the agency until the public grand opening represented a year and a half of hard yet rewarding work for the TBA team. And the grand opening itself brought its own fun yet demanding planning process.

Buildings had to be finished. Commercial contracts had to be signed. Media had to be alerted. The community at large had to be invited. New artwork for windows and hallways had to be created.

We left the building completion to the experts. And those experts trusted their agency experts (hey, that’s us!) to handle driving potential homebuyers to the grand opening. Here’s a quick look at just some of the work it took to host a successful grand opening. 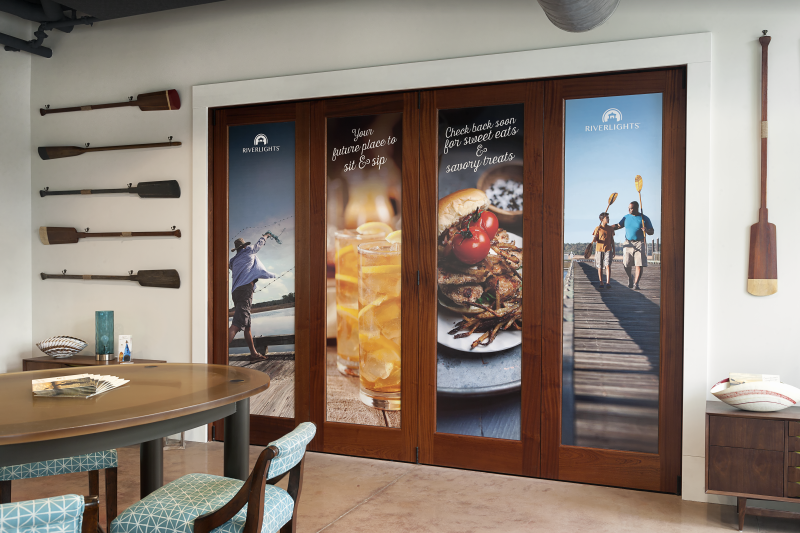 The Chart House is the official information center for RiverLights. On the outside, the TBA team created custom, frosted window treatments that subtly communicated the brand message and provided privacy without obstructing light for the open area inside.

Newland and TBA worked with a local high school student to purchase a boat he had crafted for school. The team then designed a custom table platform that incorporates the boat, serving as a focal point within The Chart House. The tabletop features a community map, while drawers underneath hold informational brochures.

Inside The Chart House is a custom video wall that displays three 65-inch touchscreen TVs broadcasting community information. Viewers can see tide charts, social media posts, community information and a custom video that TBA shot and edited just before the grand opening. The video highlights the lifestyle homeowners can expect at RiverLights. A custom content management system created by TBA allows both Newland and TBA to monitor and edit the video-wall feeds, ensuring visitors see fresh content with each encounter.

The Chart House is housed in a mixed-use building within Marina Village. Contracts for commercial businesses to open within the building are being finalized, so TBA created custom window clings to adorn the building’s exterior glass. These clings keep the behind-the-scenes work hidden until tenant announcements can be made, in addition to unifying the building with the marketing efforts that led up to the grand opening.

Media, including paid, earned and social, is vital to any client, especially when working on event attendance. So prior to the grand opening, TBA’s public relations team hosted a special media preview of the community, which included a chat with the community’s vice president of development and a community tour. Additionally, members of the media were invited to the official ribbon cutting for The Chart House and new riverfront restaurant, complete with food tasting. Ads ran in and on all major regional media, including advertorial the weekend of the event. The RiverLights social channels were filled with grand opening details and coverage leading up to and during the event, including live videos and stories from the ribbon cutting and grand opening.

But Was It a Success?

You bet it was! Halfway through the five-hour grand opening event, all parking was filled, including overflow. The shuttle busses ran a couple hours past the event, ensuring those still touring the community made it safely to their cars. The restaurant’s soft opening had zero lulls in table turnover. Guests were smiling the entire time. The final numbers are still being tallied, but as of the day following the event, several home sales were confirmed, and more than 2,500 event attendees had been counted.

A Little About RiverLights

RiverLights is a master-planned community in Wilmington that stretches across three miles of beautiful Cape Fear River waterfront. When complete, the approximately 1,400-acre community will feature 2,290 single-family and multifamily homes, townhomes and condominiums. A 38-acre freshwater lake, a variety of public parks and a waterfront restaurant are a mere sampling of the amenities the community provides.